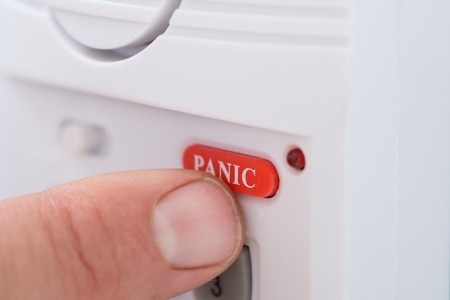 Panic is defined as a sudden, uncontrollable fear or anxiety. Imagine you’re at a business and you’re there all alone, at night. Suddenly you hear a door open and men are talking to each other about robbing the place. What do you do? You panic! Wouldn’t it be nice to have a panic button you could press to alert the cops that you need help? Definitely.

In our increasingly violent world, people seem to live “on edge” these days. It’s not a surprise that many people do “concealed carry,” whereas they arm themselves with a gun should anyone try to hurt them. That said, a panic button is an alternative to carrying a weapon. It exists to connect a person in danger with authorities who will help get them out of that danger in an efficient, swift manner.

Where do panic buttons make sense? They belong in public places, such as parks, malls or schools, as well as businesses. They’re especially useful in places where people handle a lot of money and/or valuables that others would want to steal. Having a panic button or two in such places helps put employees (and bosses) somewhat at ease. They’re there “just in case” they’re needed, and that’s reassuring, calming people’s already frazzled nerves. Life is stressful– having a panic button helps relieve stress.

Panic buttons in schools make sense to alert police as well as the entire campus that something bad is occurring and everyone should be on “high alert.”

Meanwhile, panic buttons should also be part of home security systems, accessible if needed should one family member be home alone and feel the need to push the button, essentially “calling” for help. You never know when an unwanted intruder might try to take advantage of a vulnerable person who is “home alone.”